The Mona Lisa is one of the most famous paintings of all time. I believe that is due to her unique smile. A smile has the highest positive emotional content of any symbol.

When experience a positive emotion we smile. A neural signal travels from the cortex of your brain to the brainstem. That is the oldest part of our brains in terms of evolution. After that, the cranial muscle carries the signal to the muscles responsible for smiling in your face.

Sounds simple enough. But, that’s only where it starts. Once we smile, there is a positive feedback loop that now goes back to the brain and reinforces our positive feelings.

A Smile Or Chocolate

Smiling stimulates our brain’s reward mechanisms in a way that even chocolate, a well-regarded pleasure-inducer, cannot match.

Smiling stimulates our brain’s reward mechanisms in a way that even chocolate, a well-regarded pleasure-inducer, cannot match.

That’s why in recent research scientists concluded: “that smiling can be as stimulating as receiving up to £16,000 in cash.” 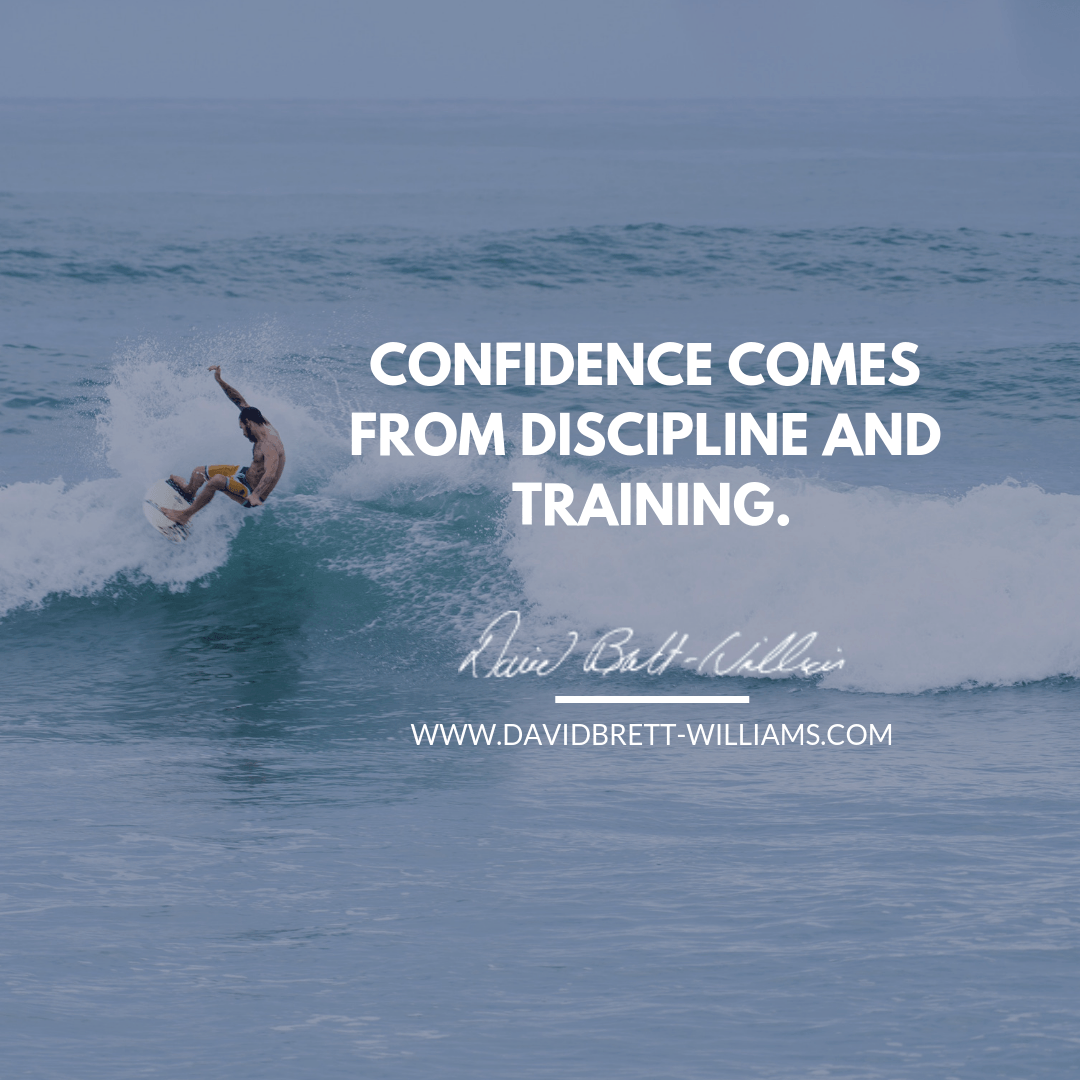 A French man, named Philippe Petit walked on a wire across the Twin Towers of the World Trade Center in New York City back in 1974. While most people would have gotten ill just looking down from that great height, he was able to walk on the wire with grace and confidence.

You could argue that to some degree this was down to his dare-devil nature. After all, he was a bullfighter, rock climber, and loved slacklining. All of which are mighty dangerous pursuits.

But Petit was confident in his walk across the wire because of his discipline. By pursuing his passion for wire walking with vigour from a young age, he was able to understand both the process and his own capabilities better.

When people saw Petit confidently walking across the wire at the Twin Towers on that day, what they were seeing was a lifetime of practice manifesting in a single moment.

We all face doubts and negative thoughts.

Our personal challenge is to face these problems head-on rather than listen to the doubt and allow it to talk us out of pursuing our dreams.

Let’s keep a few things to keep in mind when turning discipline into confidence.

A. Negative self-talk isn’t all bad.

Just because you engage in negative self-talk doesn’t mean it is a bad thing. You can use this kind of self-talk to get an advantage.

The self-doubt is what makes you question whether you have done something correctly. It is what keeps you awake at night. While doubt and anxiety can be harmful, you can utilise it to take action.

If you use self-doubt to create discipline, it will set you up for success. For example, you may get up earlier in the morning to do your best work, or you eat better to ensure your brain is always sharp.

B. Trust discipline, not motivation.

We love motivation because it feels good. But we have to face that it isn’t useful for the purpose of solving our most important problems.

Whether it is a professional or personal challenge, discipline is going to be your saviour, not motivation. So trust discipline.

Motivation is often a fleeting feeling, while discipline is far more reliable.

When you utilise discipline to prepare yourself as thoroughly as possible, then you will have complete confidence with humility in your task. This is a dynamite combination as you will be humble enough to take a closer look at where you could make mistakes.

And you come to the realisation that you are not infallible. However, you will have prepared so thoroughly that it will be inconceivable for you to encounter a problem you haven’t already thought of.

With discipline, when you prepare for failure, you gain a whole new sense of confidence in both yourself and whatever it is you are working on. 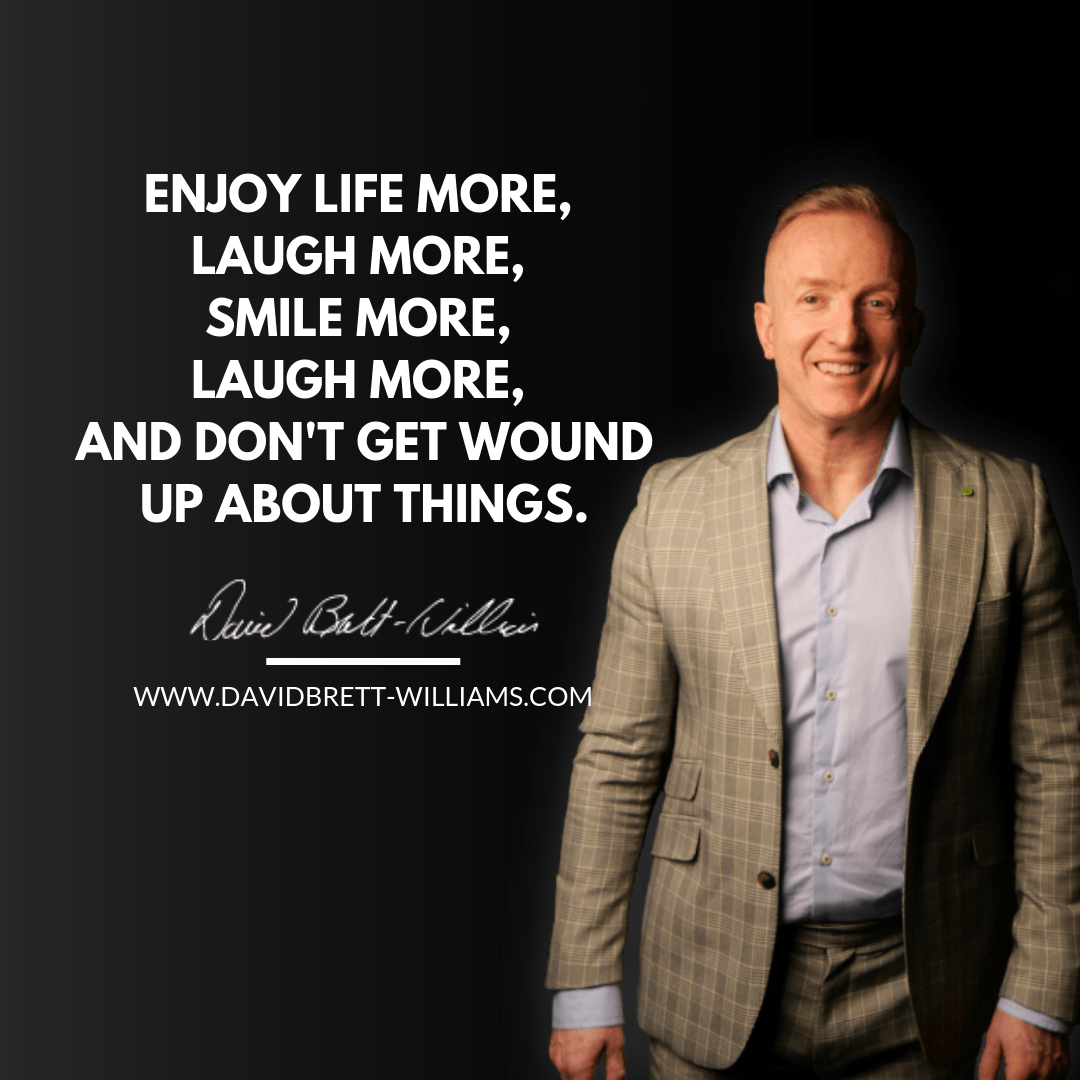 There is a growing body of research that indicates the benefits of laughter go far beyond the important factor of fun. Laughter may be a blood-pressure reducer, a stress buster, an immune-system booster, and a friend maker.

Being serious adults with responsibilities. Things like with jobs, or not, bills and meetings, and more bills it’s sometimes hard to remember to loosen up with a gutful of laughter.

Life is just too tragic and damn chaotic to absorb without the pleasure of an occasional giggle.

The whole “laughter is the best medicine” theory is correct.

It is impossible to experience the crippling burden of negative emotions while laughing. That fit of the giggles gives the body and mind a much needed moment to reset and forces us into the moment.

On top of that, it is energising, uplifting, and oddly calming at the same time. So get to laughing. 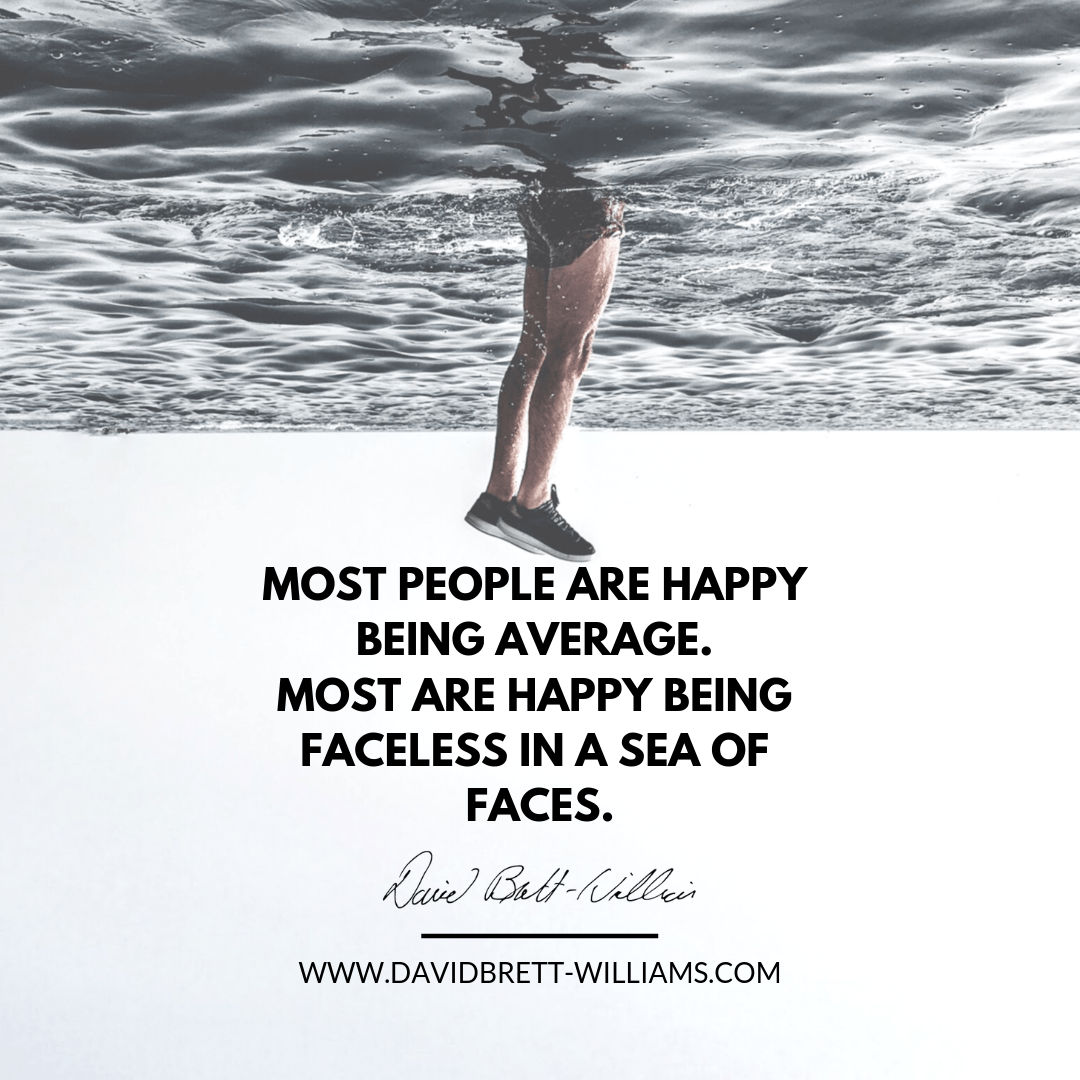 As they enter school, most children rate at a genius level for creativity. And by the time they reach their teens we have nourished their creativity to such an extent that less than 10% rate at genius level.

Surely that loss of creativity must be linked to growing up. It is, but not from maturing physically, but socially. At the age of 4, our drawings of flying cars are met with praise and encouragement.

By the age of 8, we are told that cars can’t fly and to get our heads out of the clouds. To stop daydreaming and get to work. We are taught to conform.

We become anonymous. And to break from the norm, to be different fills us with anxiety. So we remain faceless in a sea of conformity.

The world is not shaped by conformity. The world is shaped by people who refuse to accept the status quo and strive to make things better.

Thinking occupies an immense role in our lives. We are a product of what we think. Every action, every process starts or emerges from thinking.

Thinking is the ignition that starts us. It is the fuel that puts us on a path. Thinking is the ability that makes us choose a path. On which path we place ourselves. In which direction, we move our life.

It all comes down to our thinking.

David Schwartz said, “There is magic in thinking big.” Thinking big has played a significant role in the lives of every successful person.

The Magic Of Thinking Big

The magic of thinking big can create miracles in our lives. We are products of our thoughts. We behave and act in accordance with what we think.

To put it just, if we think positively, then we will act positively. If we think big, then our minds expand and we will search for ways to find greatness.

Conversely, if we think negatively, then we will act negatively, whether consciously or unconsciously. We will be unable to find ways to greatness. And will only see obstacles in our way.

You can become anyone you want to. Do virtually anything. You can achieve anything. But in your journey towards greatness, there is an obstacle.

Curious what the obstacle is? Is it your circumstances? Your origin? Your country? Or your face, colour, height, education? Your financial situation?

None of these is the obstacle. The only constraint is YOU. The only obstacle is your THOUGHTS.

Because your thinking is the origin of your ideas, the birthplace of your achievements .

If you want to become outstanding, you have to think big.

So we need to program ourselves to think success, and not failure. Thinking success conditions your mind to create plans that produce success.

The opportunities are in front of you, but you have just to think big. So think big to achieve big.

Inspire 6. “I never perceive failure as failure, only as the game I must play and win.” 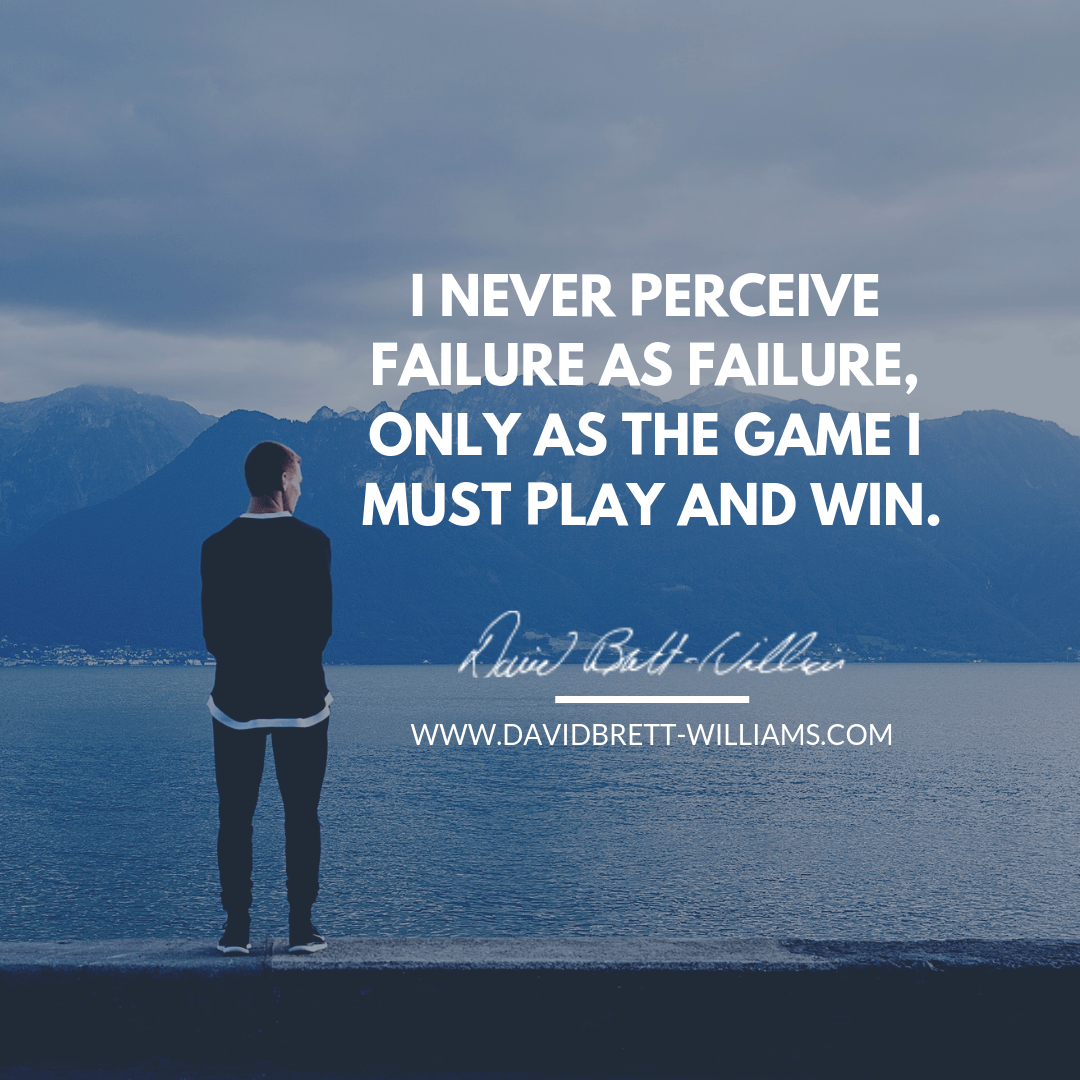 At the age of 21, a guy was defeated in a legislative race. He business failed at the age of 24. At 27, he had a nervous breakdown. He lost a congressional race at age 34. Then went on to lose a senatorial race at 45. He then failed to become vice-president at age 47 and was elected president of the United States at age 52.

This man was Abraham Lincoln. Everyone called him a failure. But was he a failure? No, he had optimistically taken the path of failure.

A young cartoonist faces numerous rejections from newspaper editors, who said he lacked talent. But then, one day a minister at a church hired him to draw some cartoons.

He worked out of a small mouse­ infested shed near the church. After seeing a little mouse, he was inspired and that lead to the character Steamboat Willie.

After being fired from a newspaper agency because he ‘lacked imagination,’ he went on to become an icon in the field of entertainment.

That man was Walt Disney. He was labelled a failure many times. But was he a failure? No, he had optimistically taken the path of failure.

She was living on welfare, divorced, depressed, and a single mother while studying and attempting to write her first novel.

That woman is J.K. Rowling, author of the Harry Potter books. I won’t tell you how many times editors rejected her novel. She could be labelled a failure. But was she a failure? No, she had optimistically taken the path of failure.

The path to success is lined with failure. The more we fail, the greater our likelihood of success.

Successful people fail. And yes, please read that again, it is not a typo.

Failure is frequently, but mistakenly, viewed as an ending. However, that doesn’t have to be the case.

For those with resilience, failure is just the beginning. If you find yourself faced with failure, it’s time to shift gears, rediscover what will inspire you and find a solution to the problem.

Maybe you need to start from scratch again. If so, that’s perfectly acceptable. One of my first business’ failed, but I rediscovered what would inspire me and here I am, still standing and then some.

But why? I diligently examined the problems with my first business and ensured that what I learned from that experience influenced my future decisions.